The Lebanese Hatoum gives the pool tables an oriental touch 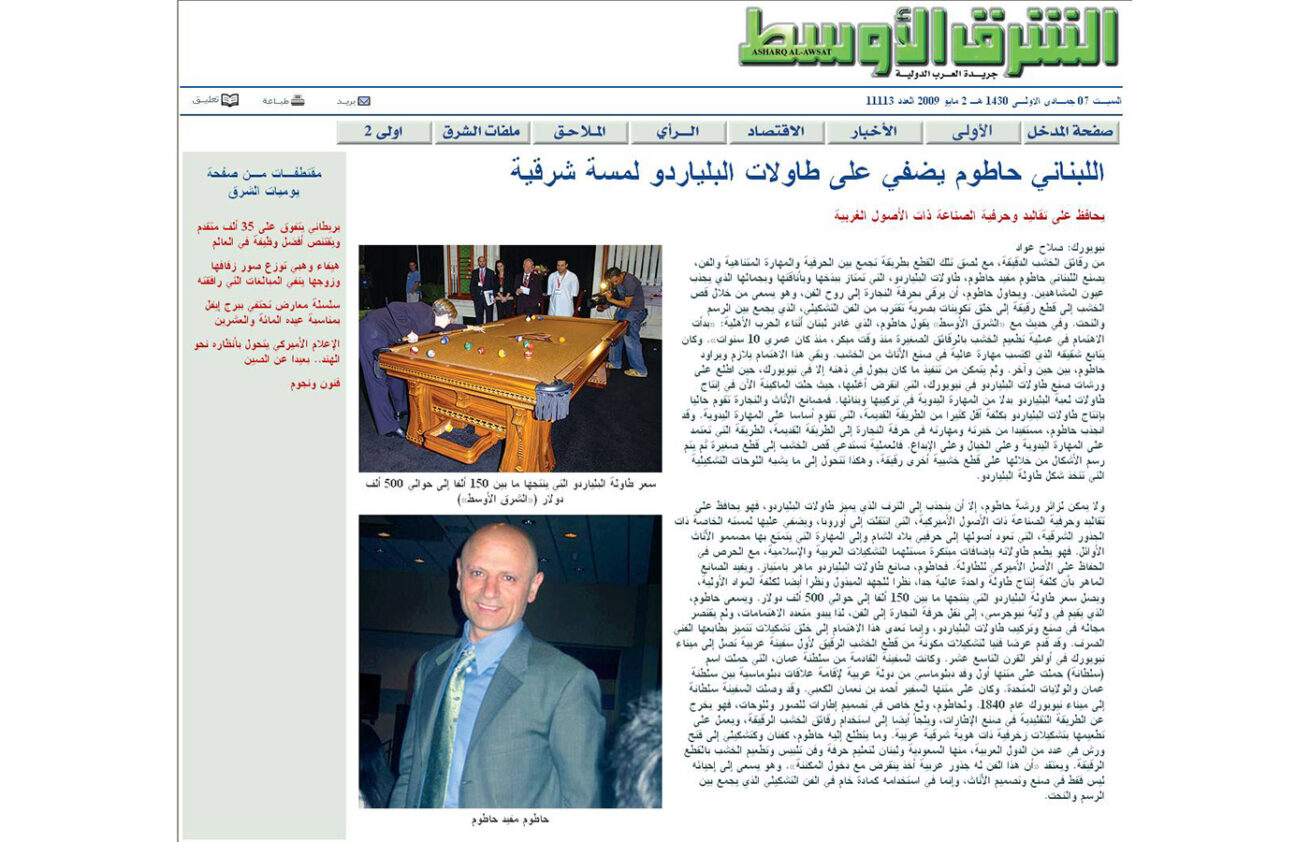 New York: Salah Awad
From fine wood chips, with a combination of craftsmanship, craftsmanship and art, Lebanese Hatoum Mahfid Hatoum makes billiard tables that are lavish, elegant and attractive to the viewers. Hatoum tries to raise the carpentry craft to the spirit of art. By cutting wood into thin pieces, Hatoum tries to create visual compositions that are close to the plastic art, which combines drawing and sculpture. In an interview with Asharq Al-Awsat, Hatoum, who left Lebanon during the civil war, said: “I started paying attention to the small-chip wood-burning process from early on, since I was 10 years old.” He was pursuing his brother who gained a high skill in making wood furniture. This interest has always been haunted by Yathir Hatoum, from time to time. He was only able to do what he thought of in New York when he looked at the billiard tables in New York, most of which were extinct. The machine now replaced billiard tables instead of handcrafts. Furniture and carpentry factories now produce billiard tables at a much lower cost than the old one, which is based mainly on manual skill. Hattoum, drawing on his experience and skill in carpentry to the old way, was attracted to the method of manual skill, imagination and creativity. The process calls for the cutting of wood into small pieces and then the shapes are drawn on other thin wooden pieces, and thus turn into something resembling plastic billiards shaped like a billiard table.

The visitor to Hatoum’s workshop can not but be drawn to the luxury of billiard tables. It preserves the traditions and craftsmanship of the American-origin industry, which has moved to Europe and imparts its own orientalist touch, rooted in the craftsmen of the Levant and skill It has the first furniture designers. It feeds its tables with innovative additions inspired by Arab and Islamic formations, while maintaining the American origin of the table. Hatoum, the billiard table maker, is skilled. According to the skilled manufacturer, the cost of producing a single table is very high because of the effort and the cost of raw materials. The billiard table produces between $ 150,000 and $ 500,000. Hatoum, who lives in New Jersey, seeks to transfer carpentry to art, so it seems to be a multi-concern, not only in the manufacture and installation of billiard tables, but also in the creation of formations characterized by its artistic nature. He made a technical presentation of the formations made up of thin wood pieces for the first Arab ship to reach the port of New York in the late nineteenth century. The ship from Sultanate of Oman, carrying the name Sultana carrying the first diplomatic delegation from an Arab country to establish diplomatic relations between the Sultanate of Oman and the United States. It was carrying Ambassador Ahmed bin Numan al-Kaabi. The ship Sultana arrived at the port of New York in 1840. Hatoum, especially fond of designing picture and painting frames, deviates from the traditional way of making tires, and also uses thin wood chips, and heals them with decorative motifs of oriental Arabic identity. Hatoum is looking forward to opening workshops in a number of Arab countries, including Saudi Arabia and Lebanon, to teach crafts and art to decorate and polish wood with fine pieces. “It is believed that this art has Arab roots that is becoming extinct with the introduction of mechanization.” He seeks to revive it not only in the making and design of furniture, but in its use as raw material in the plastic art that combines drawing and sculpture.
http://archive.aawsat.com/details.asp?issueno=10992&article=517436